You are travelling through Scotland and wait, you wonder, what is one thing you absolutely must do – See Edinburgh to soak in the literary history, Travel through the Scottish Highlands, Hunt for Nessie at Loch Ness and wait.. what’s more Scot than Scotch? Isn’t Scotch that makes Scotland world famous? Do I even need to add whisky to Scotch for you to understand my nudge and wink?

On a parallel note – do you know the difference between whisky and whiskey? Well, the connoisseurs smell a different smell in the e. The Scots think of whiskey with the e as an inferior spawn of their evolved drink made from the sweet waters of the Highland. So if you were American or Irish, you might perhaps argue, the whiskey is as good or perhaps better. Well, Scotch it is for now! And therefore, whisky!

So I’m told the best and only malt whisky trail in the world winds its way through Speyside, by the banks of the sweet waters of the River Spey, where there are about 9 distillieries, including the famous Glen whiskies, The Glenlivet and Glenfiddich. So here I was in Aberdeen, keen to taste Scotland’s whisky, standing at a Visit Scotland office asking them to tell me how I can. Like the genie in a bottle, the lady there, whisked out a map, pointed to a quaint little town on the outskirts of Aberdeen – pointed us in the direction of the bus station and told me the number of the bus that goes there! And that’s precisely what we did.

Caught a bus from Aberdeen and headed straight to Oldmeldrum. Through rolling fields where hay lay scattered in precise bales in October, in preparation for the cold winter. Oldmeldrum is the kind of picture-perfect village you read about. Get down at a bus stop at the end of the fields, walk into the village along the one main path, very sure that you can hardly get lost in the place. There is a pub and one ‘posh’ restaurant that serves roast but at their own sweet time. The main road of the sleepy village forks from the ‘high street’ through a lane of cottages with brightly flowering gardens leads us to our destination. The home of GlenGarioch single malt scotch whisky, one of the lesser known Glen cousins, with a name that few outside Scotland would know how to pronounce. We went hunting for Glen-gari-oak and was enlightened at our wait at the Visitor’s Centre – Glen-geeree.. That’s the whisky you ask for if you want it.. 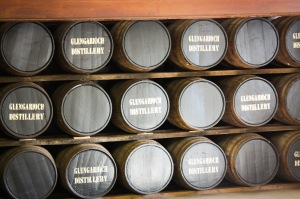 I wasn’t a connoisseur of fine whisky when I landed in Oldmeldrum, but you don’t have to be one to savour the experience. Are you interested in the process of how the humble barley turns to whisky? If the chemistry behind the craft interests you, then a heading off on a whisky trail is highly recommended.  The GlenGarioch distillery, which is part of the Morrison Bowmore distillers now has Japanese distillers Suntory as its owners. They have two more famous brands – Bowmore and Auchentoshen, if peaty smoky Islay whiskies are more the kind you like to sip and savour.

That trivia out of the way, back to the whisky made here-  in the same old way the Doric speaking Scots produced it for centuries – good quality barley sourced from the Scottish fields in the glen fed by the sweet waters in the region is fermented into malt before it is distilled to produce whisky – usually distilled twice to bring it to the desired alcohol concentration. The guided tour through the distillery is like a walk through a new world, filled with age of wisdom. Some interesting snippets –

Through the walk around this tiny distillery you are likely to be chuckling. You can’t help it, the Doric local wisdom turned into posters are just plain witty. But the best part is definitely the tasting at the end – when their bottles are brought out, the snifter-tumblers arranged and the whisky poured. The moment of awe for me was when I took a sip of their Glen Garioch and a line of pale golden fire divided my tongue straight down the middle. Imagine creating a character so well-defined by putting barley through various processes of distillation that you can confidently predict it?

There’s something about the Scotland – the air, the water, the land that makes whisky taste good perhaps. The same whisky tastes different in India. But everytime I see a bottle of Glen Garioch ( Glen-Gee-ree, remember?) I think back about the time they let me in on their secret. Through the bus journey back from Oldmeldrum to Aberdeen, I remember running my tongue across the upper palate of my mouth, just to savour the fire that burned its way through the tongue down my throat. Whisky – tasted neat – no ice, no water.. just pale, golden fire and a new respect for the Scots who used the science of distillation to produced some fine alcohol, with few precise measures or computerised settings to maintain temperature or quality!

If you travel by train from Inverness to Aberdeen, you are likely to see huge warehouses by the rail road – Chivas Regal and Johnny Walker are two I spotted. Did I spot a Glenlivet too?? I think I did. But what is travelling through Scotland without some whisky tales to trade?

8 thoughts on “On the Whisky Trail in Aberdeen”